The 2021 Virtual MV Speech Novice Summer Camp was a definite success! From instructive presentations, to engaging and fruitful activities to the final Friday showcase, the effort put in from volunteers and students alike made the camp purposeful and lively. We hope to see you all join the MV speech team soon! Now hold on tight as we relive some of our favorite memories from camp!

Fun for the (speech) family.

Chloe Bouchon stifled a giggle as she continued her speech on “how to grow the perfect watermelon”. After being given her topic “watermelons”, Chloe had to talk for two minutes about her topic while continually increasing the depth of her speech. While actual topics in this event aren’t usually silly,  Extemporaneous students played this ‘One Word Game’ to practice sounding confident in their speech with no preparation. Likewise, each branch played games with their students that engaged  them in the skills necessary for their speeches. 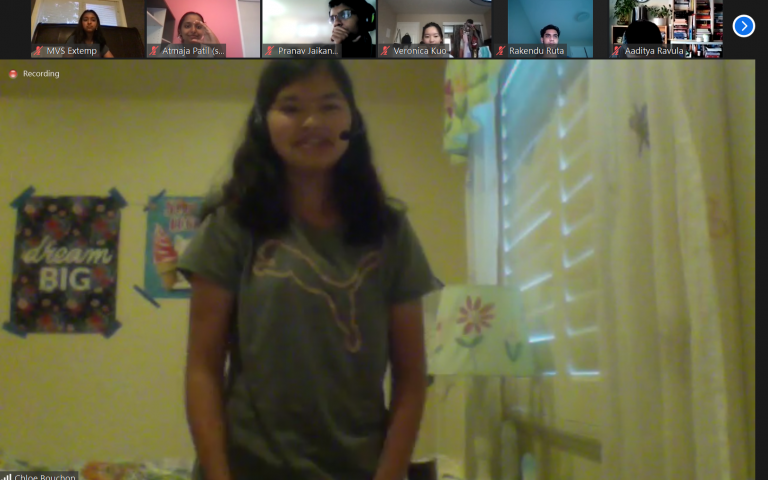 On the first day of camp, the students were split into four groups and explored the different branches of speech in rotations. During a rotation, the students would play games that helped them to get to know each branch. Throughout the rest of the week, volunteers continued leading their branch’s students in playing different activities in between teaching presentations. Here are some of the students’ favorite games in each branch!

In Impromptu, students played a game called “Know-it-all”. During this activity, a student receives a random topic and pretends to know everything there is to know about said topic. For the next minute, the student says whatever they want about their topic while pretending to be extremely knowledgeable on  the subject, thus the nickname “Know-it-all”. Afterwards, the audience asks questions, trying to expose the speaker’s fabricated expertise, while the speaker has to use their “knowledge” to respond to the questions. While playing this game, Impromptu students practiced the ability to talk confidently and pace themselves with no prep time. 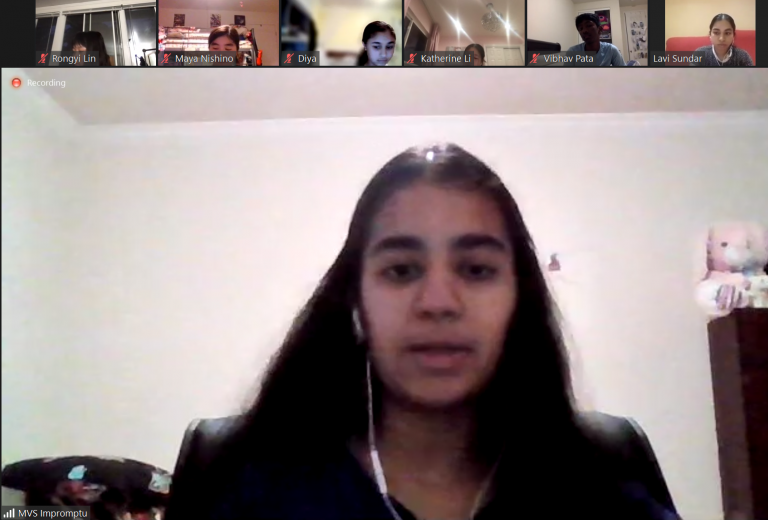 Abirami, Impromptu Branch Head, walks the impromptu students through an activity after a five minute break.

In Extemporaneous, besides playing the “One Word Game”, students also had a good time participating in an activity known as the “Group Story Telling Game”. To play this activity, a student receives two random words. Then, the student makes an entire story based on those two words. These stories would often take some weird turns and end up in “interesting places”. Not only was this game beneficial for students learning to speak freely given a topic with no prep time, the game also let students relax and have fun with their peers. 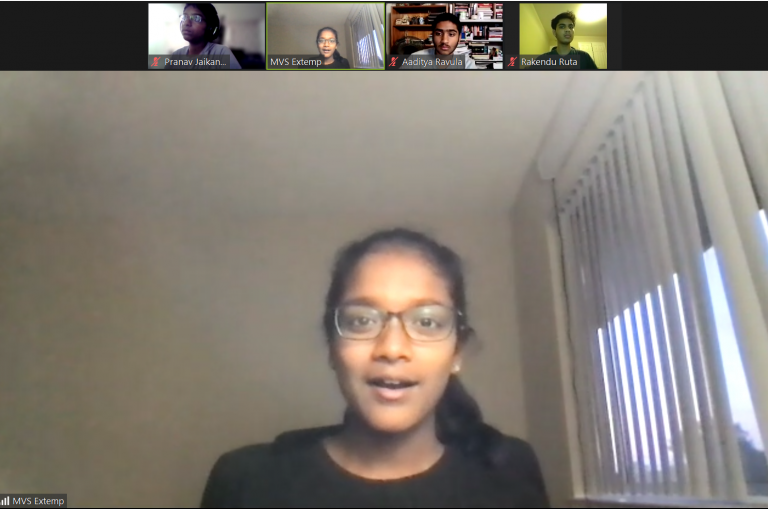 Iniyaa Suresh, Extemp Event Captain, gives directions for the next activity to her breakout room group.

Interpretation students had a favorite activity known as “Party Favors”. This game is played with one host who is hosting the party, and 4 actors who are invited to the party. The host is sent into a breakout room and everyone in the meeting (all the actors) discuss and decide on the characters the 4 actors will act out. Afterwards, the host is let back into the meeting and “invites” each guest to the party by having a short conversation with them. Each actor acts as their own character while the host tries to guess their character based on their voice, movements, and conversation answers. The goal of the game is for the host to guess each character. This activity was useful for students to practice characterization and learn necessary interpretation skills.

Finally, in Original, students played the “Make a Commercial” game. During this activity, a student chooses a random item in their house and creates a one-minute speech about their chosen topic. Some examples of random items are furniture, foods, paintings, etc. After selecting their item, the student then gives a speech persuading the audience that the chosen topic is very important and useful. This activity helped students improve their original oratory speeches as the students practiced their persuasive speaking skills.

These activities not only improved the students’ fundamental skills for their specific branch, these games also served to relax the students and volunteers.

Some branches also created kahoots for their students to test the students’ knowledge of the material just presented or get-to-know-me kahoots for specific captains! 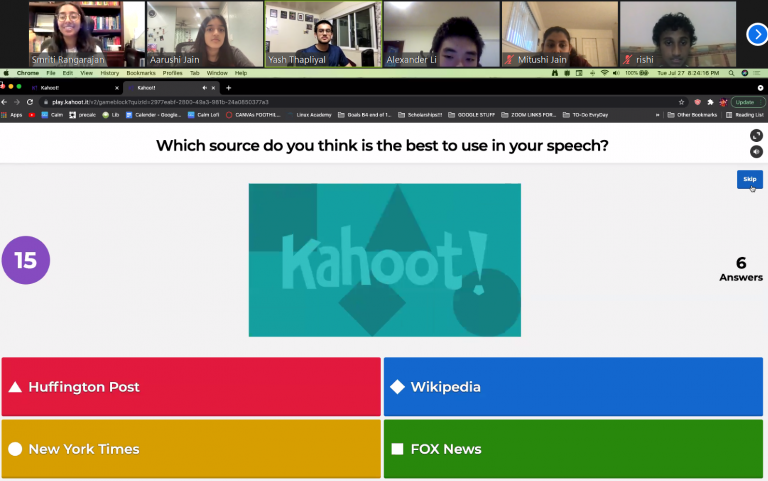 Original students concentrate while playing a kahoot designed to test their knowledge of original speech rules. 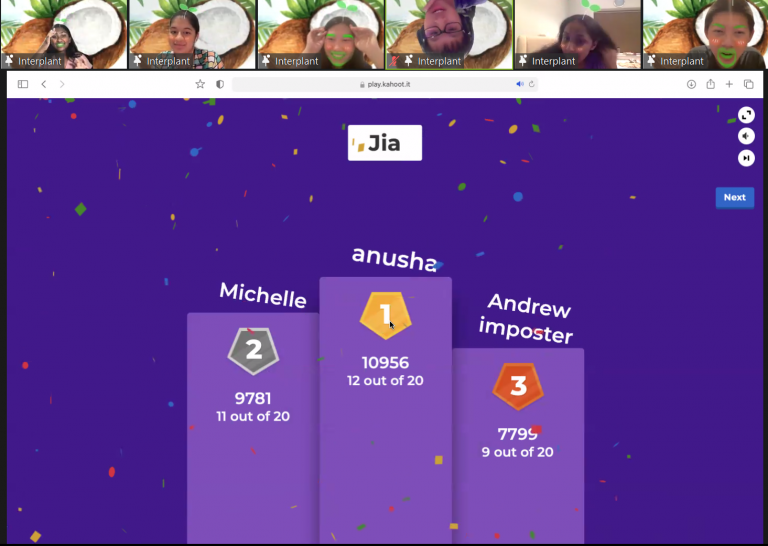 The Interp group celebrates the winners of the “Jia” kahoot while donning their signature “Interplants” zoom costume.

During this summer speech camp, many students overcame various obstacles and pushed past their limits. For example, Aaditya Ravula accomplished what many other seniors would shy away from - taking the initiative to start a new extracurricular as a senior.

Ravula also mentioned his favorite speech activity and how it took a surprising turn.

“We had to talk about [the topic] with zero minutes of preparation time…” Ravula said. “They gave me boba, and I didn’t know what [boba] was, so I talked about Boba Fett, the Star Wars character.”

The activity that Ravula referenced is the extemporaneous game “One Word Game” mentioned in the Activities Blog. But Ravula wasn’t the only one who enjoyed playing these speech games in between lessons. Varsha Iyengar also discussed her favorite interpretation game: Party Favors.

“They give us a couple [characters], and we have to act it out,” Iyengar. “All of us made it really funny, so we were just laughing all the time.”

Another student, Maya Nishino, noted an Impromptu game called Unbelievable Biography where people give random names and a student has to make up their biography… real or fake.

Through improvement comes opportunities to learn more, a lesson that Nishino knows best.

“I’m usually not that confident in what I say, so a lot of people talk back to me,” Nishino said.  “But in impromptu, they tell you the more confident you are, the more trustable you seem and the more people will believe you.”

Rishi Saravanan also appreciated the lessons he had been taught throughout camp.

“The most important thing I learned was probably the stuff I learned on delivery,” Saravanan said. “So we learned [about] voice inflection, proper hand gestures, and proper eye contact.”

However, the students weren’t the only ones who learned from the summer camp - our hardworking volunteers also touched on their takeaways from camp. Nitima George, an Impromptu volunteer, discussed what she had noticed as students gave their speeches.

“I saw [that] a lot of different people have different ways of thinking of their speeches and performing them,” George said. “You can see people’s personalities in the way they give their speeches.”

“Because this is the first year we’re doing Extemp, I think we’ve done well for not having done this in the past before and teaching [this] rather hard event,” Madhan said.

Shivani wasn’t the only branch head celebrating the success of the camp. Michelle Zheng, the Interpretation branch head, smiled fondly as she recounted the days leading up to the showcase.

“I feel like it was really successful because everybody had fun and we all [learned] a lot of interesting facts about each other,” Zheng said. “I’m really enjoying the camp… I feel like we really bonded over this time period.”

But behind all this success, there’s people who work hard to make sure the camp runs smoothly. Aarushi Jain explained all the time and dedication the volunteers put in.

“I think it was pretty successful, [since] all of us volunteers met up and spent a lot of time making a good lesson plan,” Jain said. “We were able to present a lot of content on Original Oratory and we also planned a lot of interactive games.”

For all the work the volunteers put in, they were also able to get something out of the camp. Madhan shared her personal experience on how being a mentor to the students positively impacted her beyond the speech team.

“Last year during online school, I struggled with talking to people over zoom,” Madhan said. “But I think being in a teaching position led me to be the one that’s more extroverted, and that was a good experience for me because I learned to step out of my comfort zone.”

Likewise, being a camp volunteer has also impacted Jain positively.

“This is one of my first times being on the teacher's side,” Jain said. “And [to] see how your students are improving throughout the week, you know, it makes you happy.”

Below are the pictures of all the volunteers and students featured. Thank you to everyone who contributed to this blog! 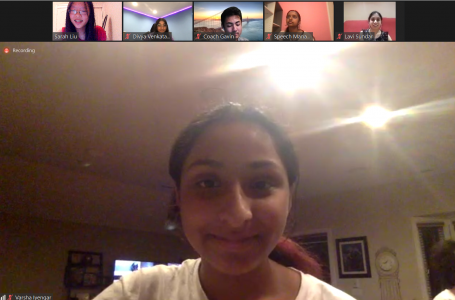 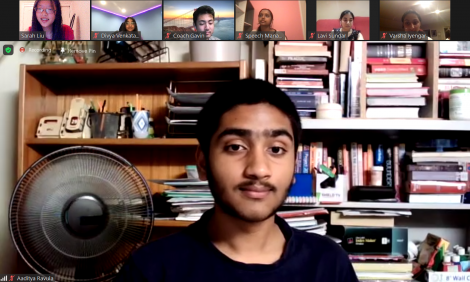 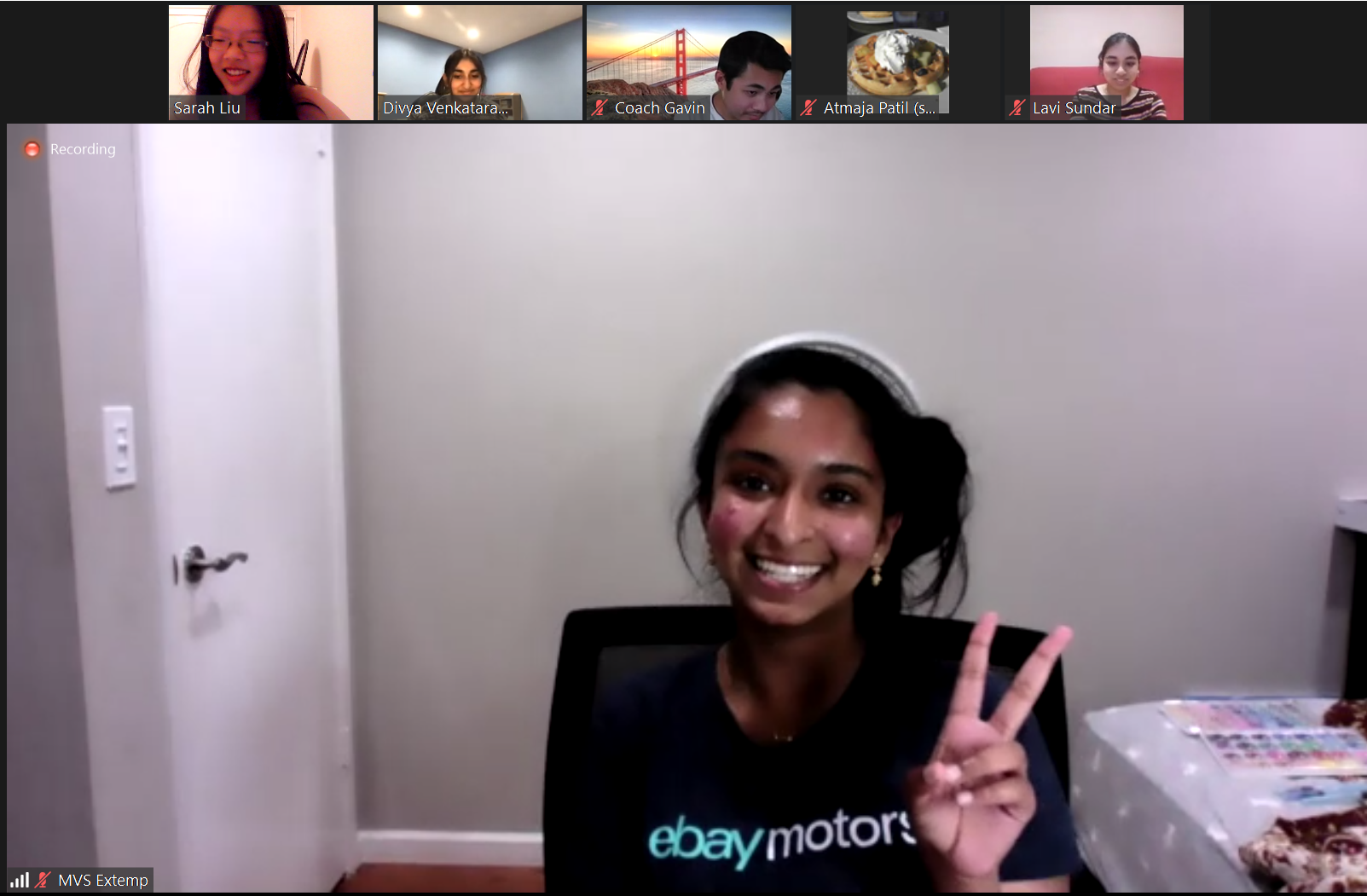 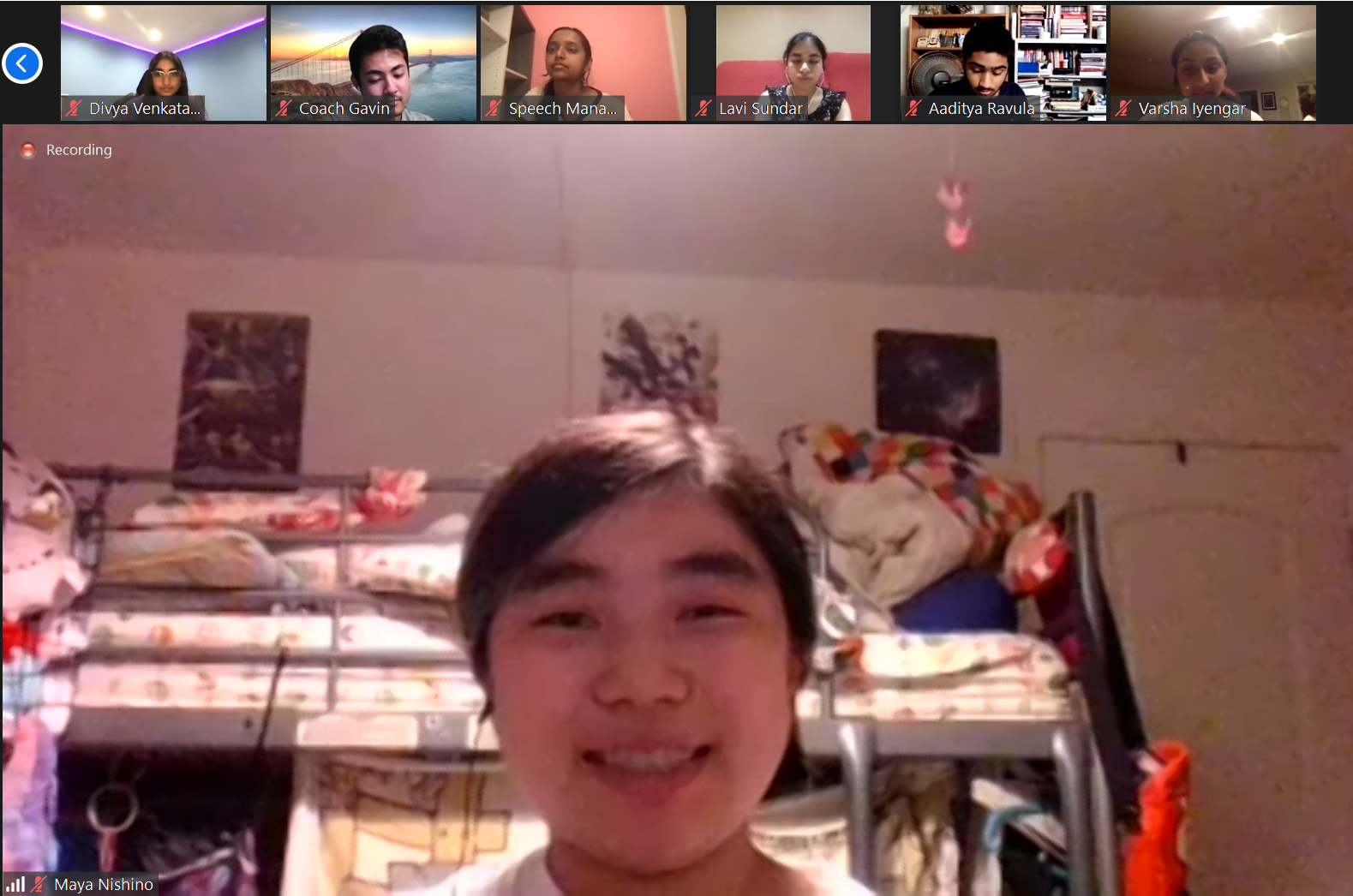 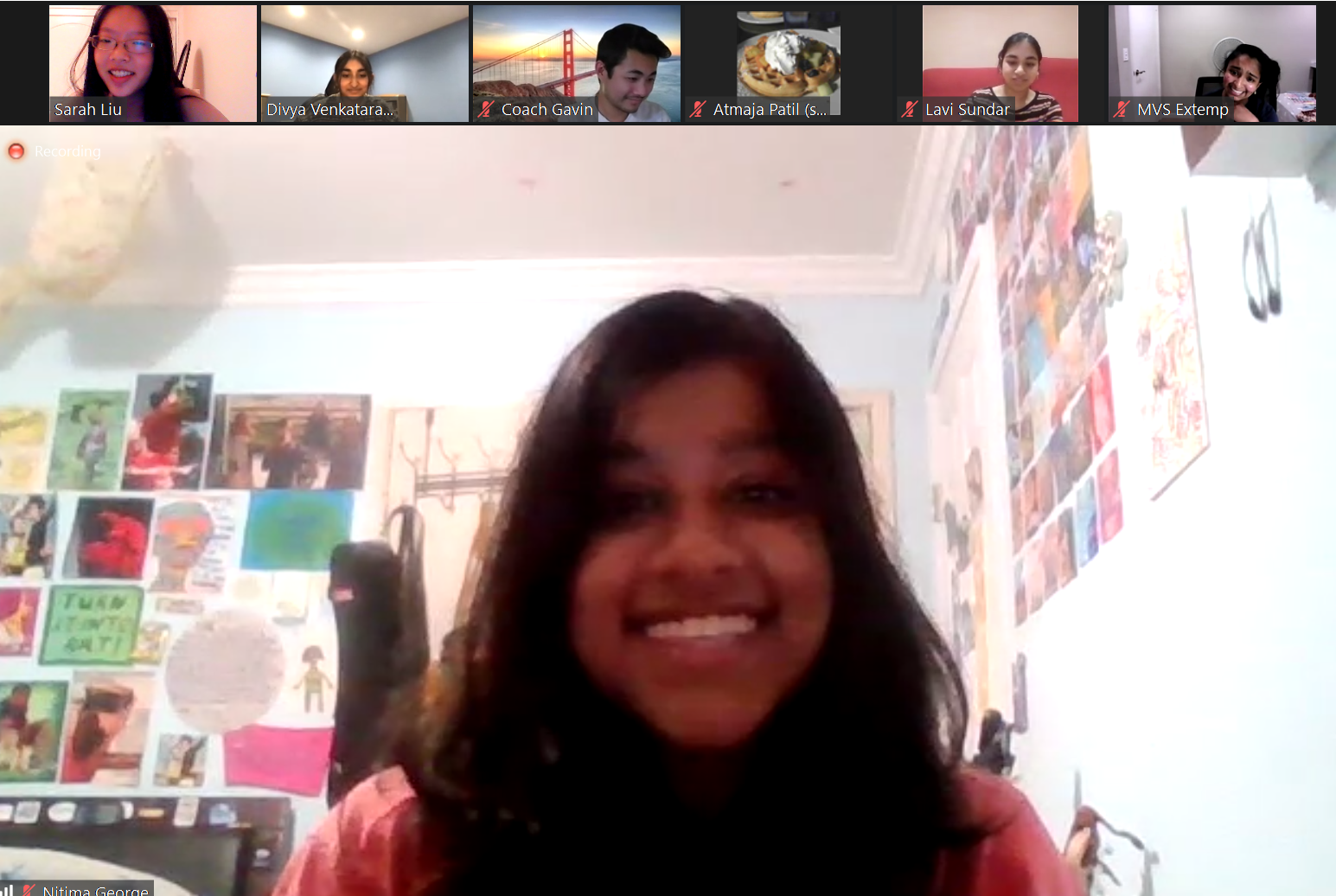 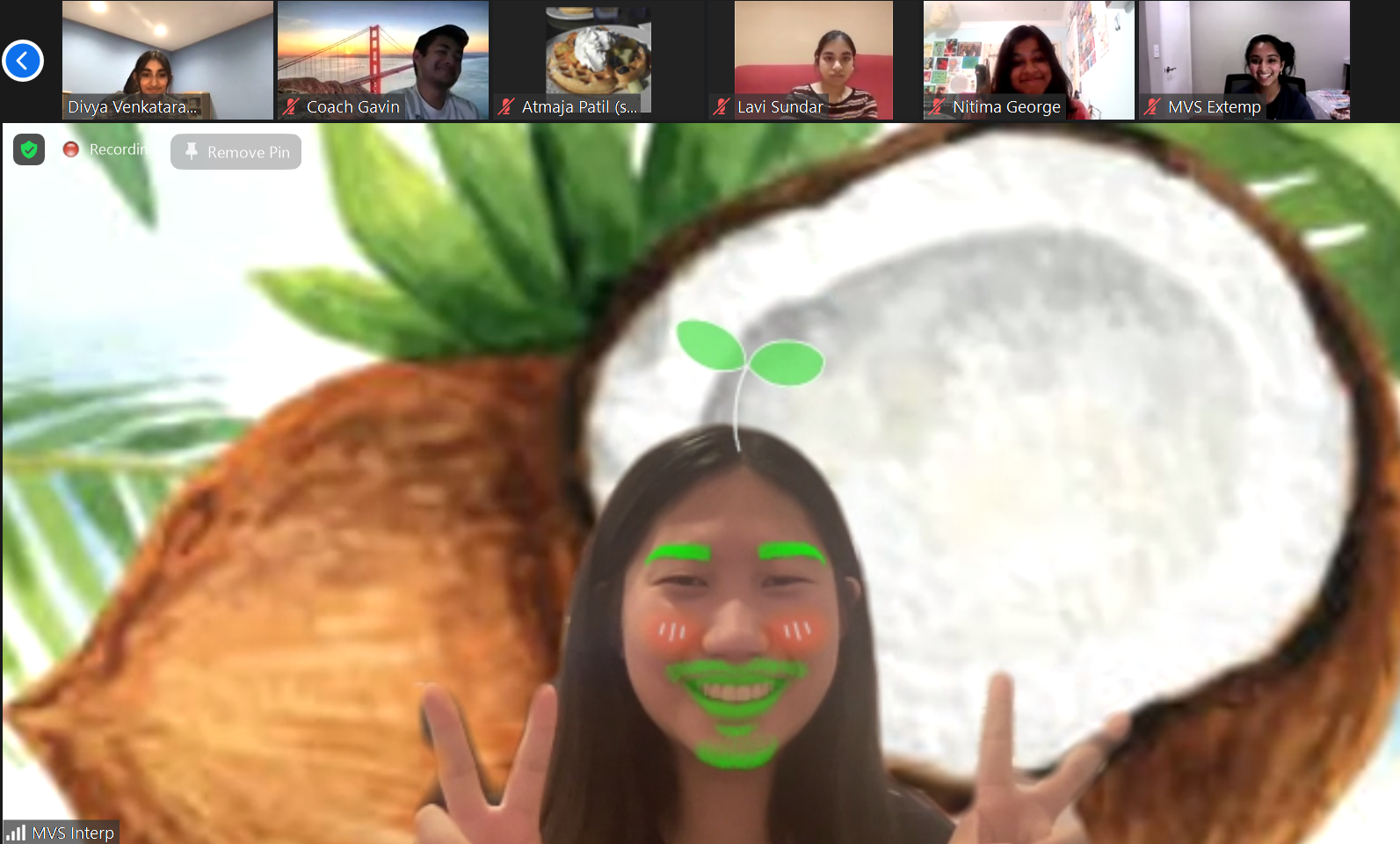 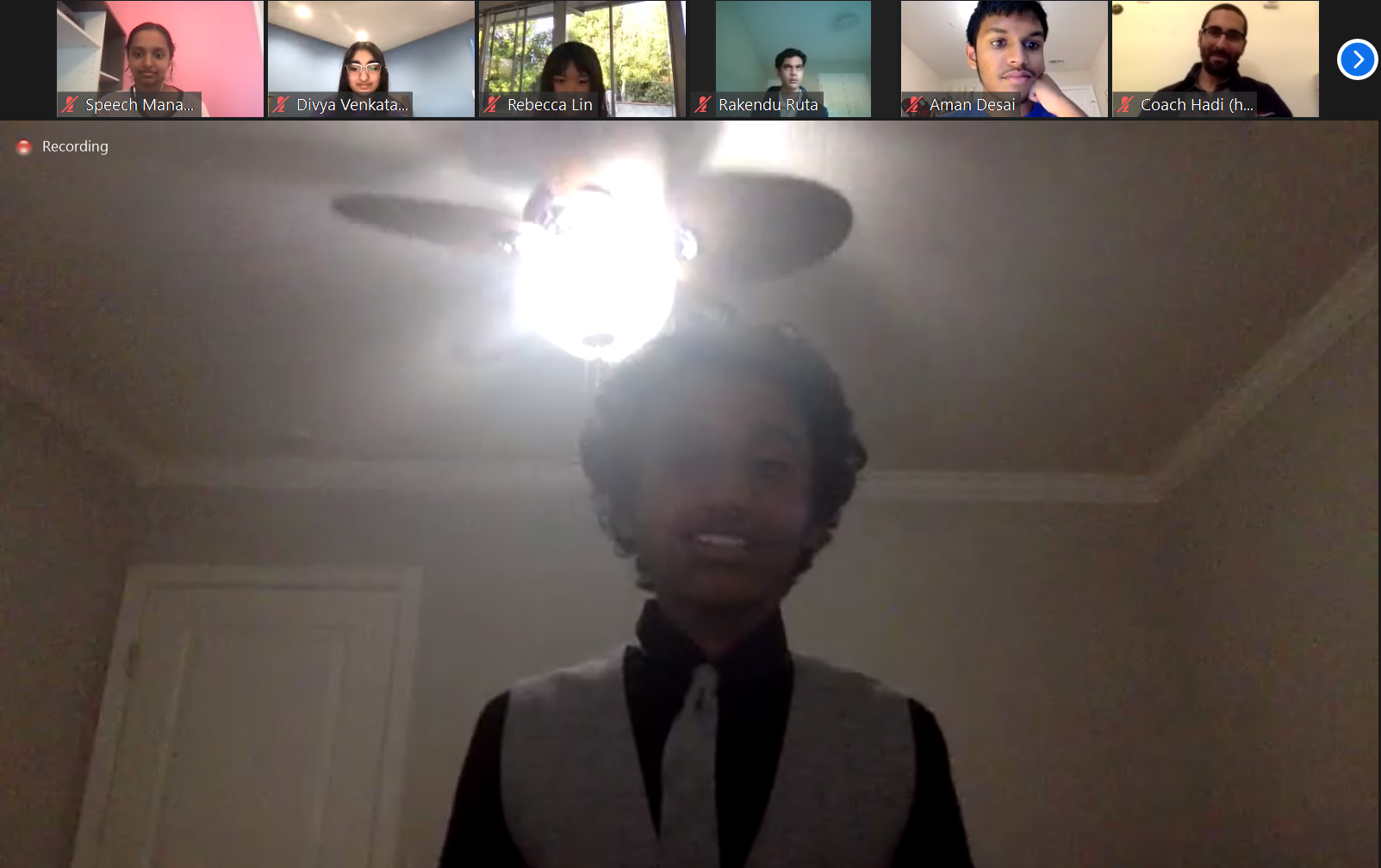 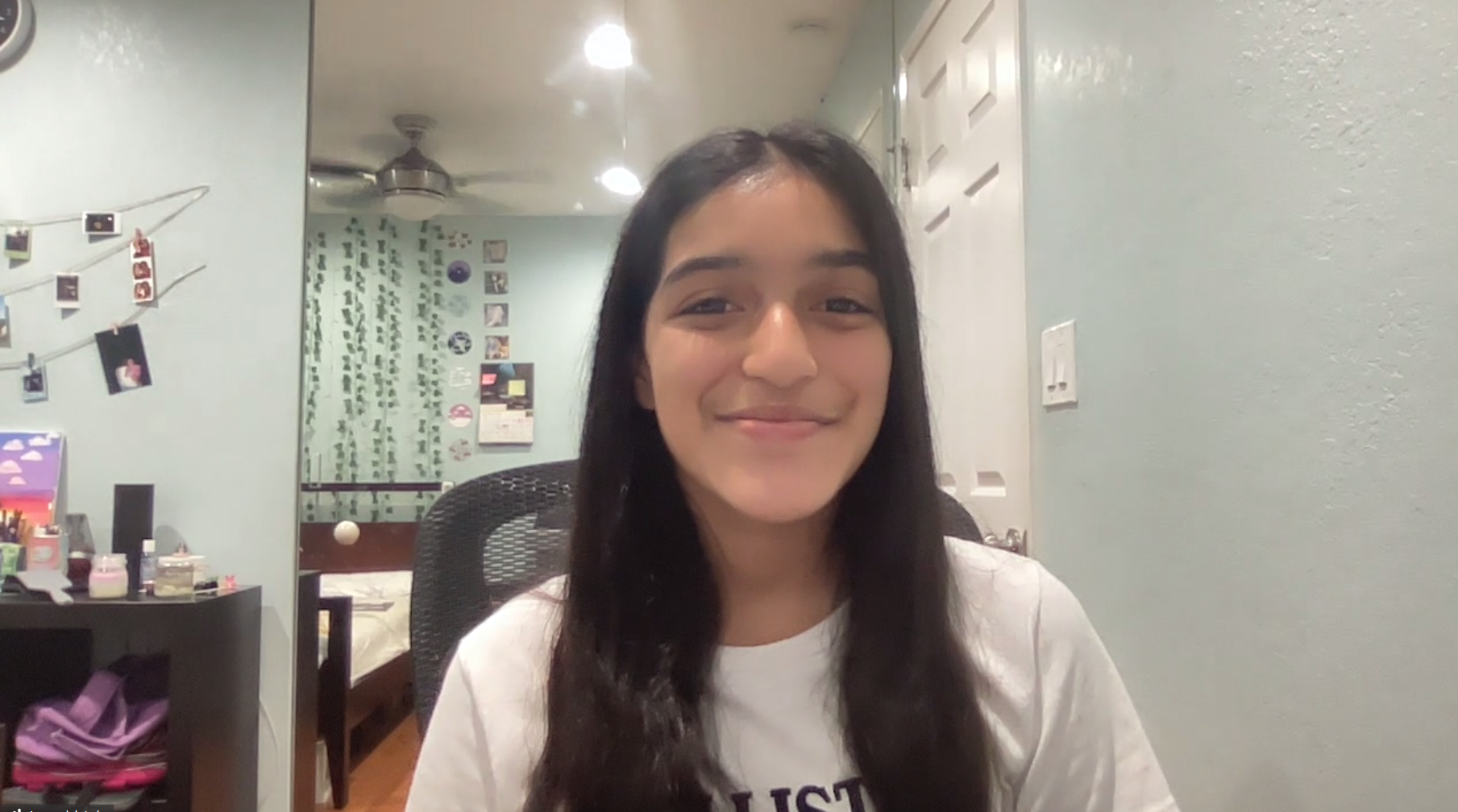 Students presented the speeches they had been working on throughout camp.

Showcase day - the day that every camper was excited for!

As soon as the anticipated showcase started, every student was seen dressed in formal attire and looking their best. Students and volunteers alike looked on excitedly as the showcase got off to a quick start. Hours of hard work and preparation had led to this day.

As soon as the first speeches started to roll, the zoom chat was bombarded with overwhelming support for each speaker. Volunteers hyped up not only their own campers but also campers from other branches. While a student was presenting the beginning portion of their speech, a horde of clapping emojis and heart emojis would rush on screen to encourage the speaker. This trend continued on until the very last speech. 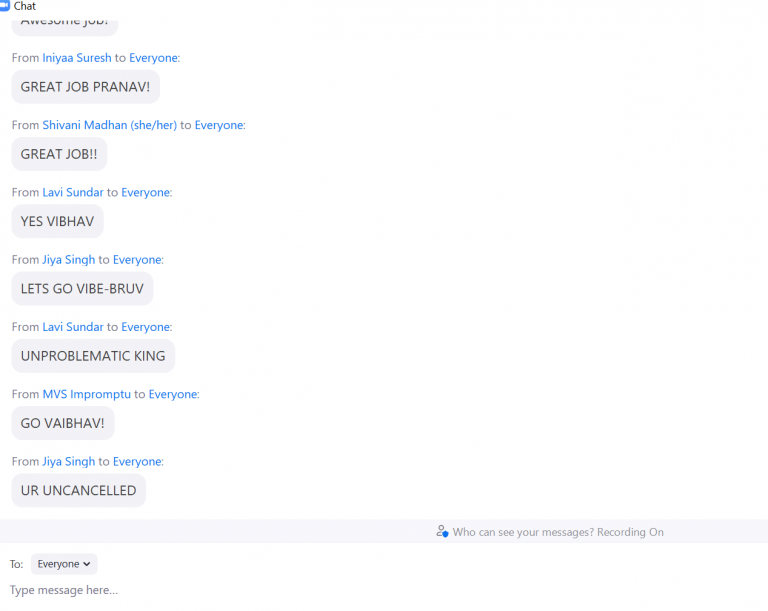 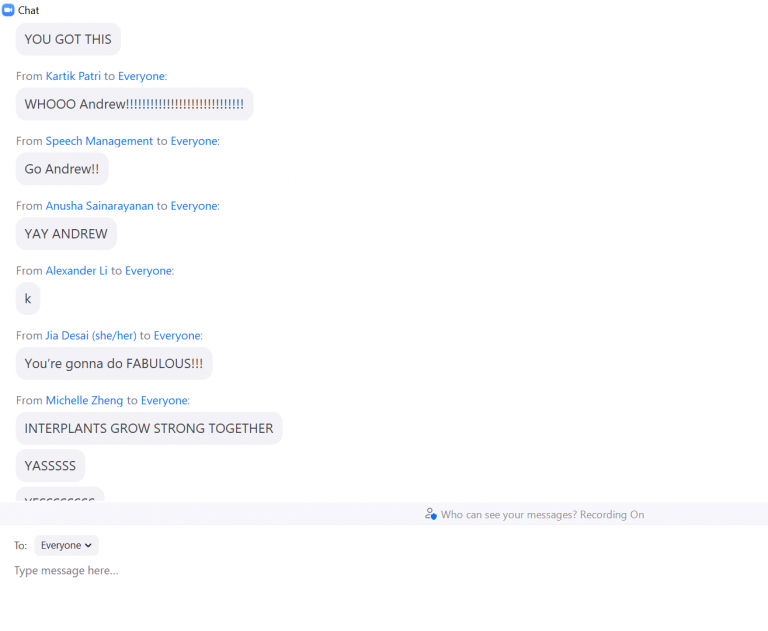 All in all, we are so proud of every one of you for making the initiative to sign up for speech summer camp, for having the dedication to put all your effort into your speeches, and for having the courage to speak in front of a large audience on showcase day. You all have accomplished so much in one week and we would be ecstatic to welcome you to our Monta Vista Speech and Debate team this school year!

After the showcase, coaches for each branch led coach workshops for students to better their techniques. Each workshop consisted of a lesson and presentation followed by an interactive activity.

Coach Hadi, our Interpretation coach, taught a workshop on expressing emotions and giving life to every single word in a speech. Clearly, his workshops engaged students to explore the use of emotion through dramatic facial expressions (some of which they might not have known they could make)! 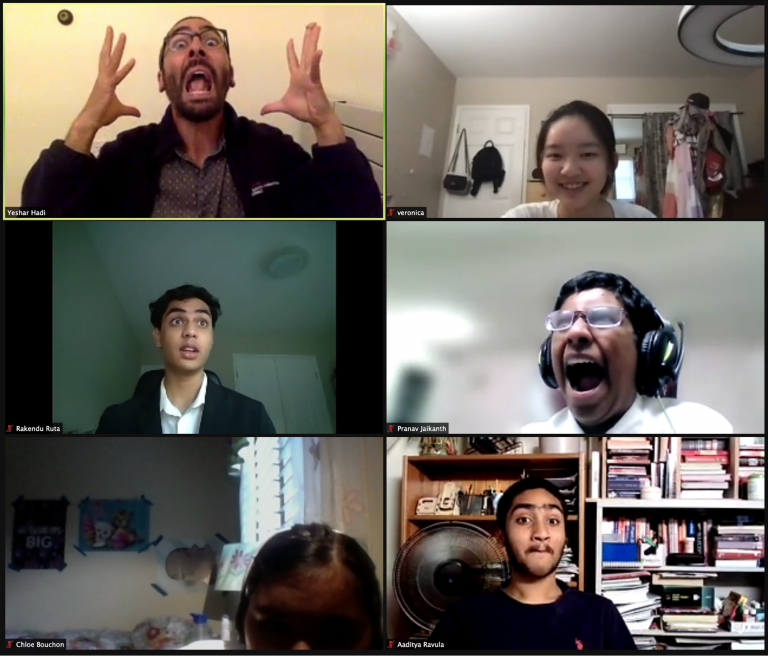 Our Extemporaneous coach, Coach Aman, taught the students about outlines of a speech, one example being Freytag’s Pyramid. 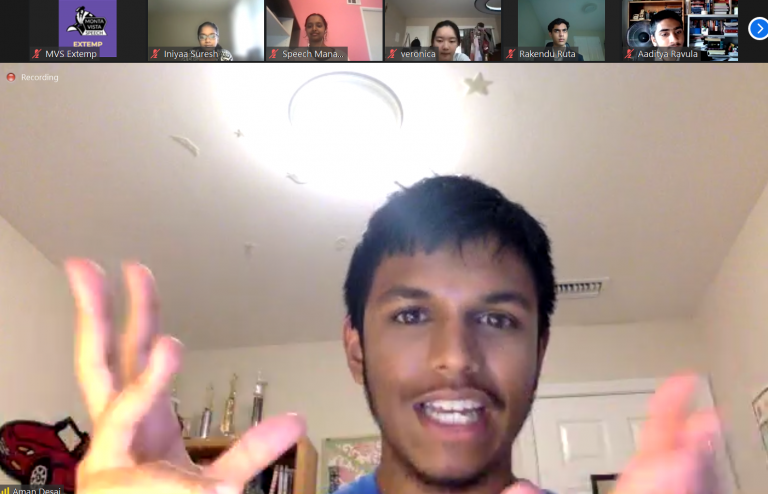 Coach Riya, our Impromptu coach, discussed having scenarios or stories to keep in a “database” to be able to use during a speech with limited prep time. She also led an activity to write down experiences and morals one learned from that lesson. 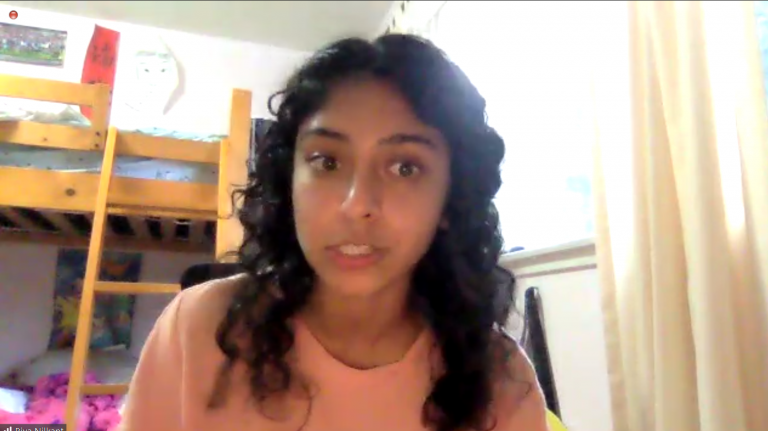 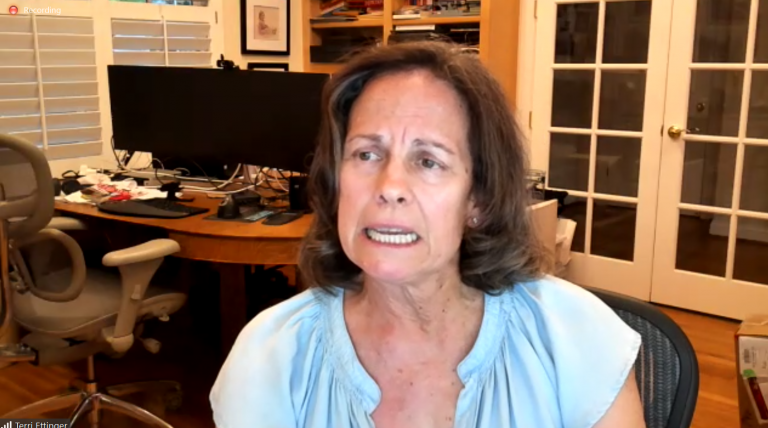 A big thank you to our coaches for giving personalized feedback for each student as well as leading detailed workshops to improve speeches!

Finally, here are some photos of speakers during our showcase. Fantastic job everyone! 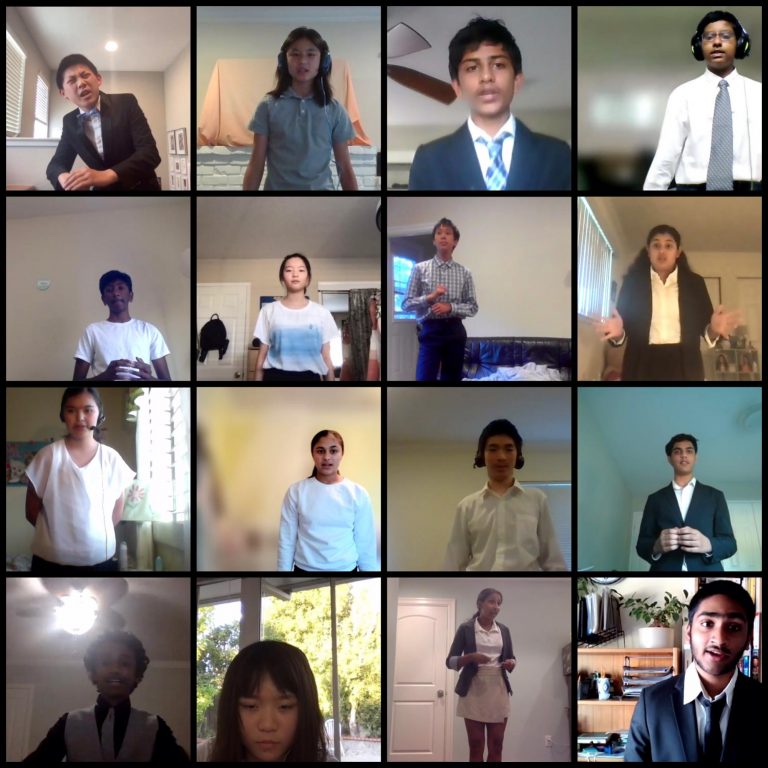